Dr. Natu Mwamba, Deputy Governor at Bank of Tanzania, is pictured at an AFI network event in Tanzania held in April 2016.

In Tanzania, access to financial services for the unbanked expanded drastically when convenient and relatively cheaper options became available to receive and send money through simple feature mobile phones.

Four mobile network providers were in stiff competition in a market of 39 million registered mobile wallets (this registered wallet number does not include multiple wallet holders nor some of the dormant wallets from providers that did not exclude them after recycling their mobile numbers), 13 million of which were active (“active wallets” refers to the use of a mobile money account at least once in 90 days. This is the total number of all active accounts in the referenced month). This was in October 2014, when three of the four mobile money providers signed on to interoperability and made Tanzania the first country to successfully  develop and implement standard business rules for interoperability (Source IFC: Achieving Interoperability in Mobile Financial Services: Tanzania Case Study).

By February 2016, the fourth provider had signed on and Tanzania was a global leader in the interoperability of digital financial services delivered by mobile network providers. How did this happen? This article highlights the key factors contributing to DFS interoperability in Tanzania.

A regulatory environment nurturing competition and cooperation provided a foundation for dialogue and engagement around interoperability. The Bank of Tanzania, the country’s central bank, played a monitoring role, ensuring that DFS providers offered services in compliance with risk mitigation frameworks (guidelines were issued that emphasized the use of international standards) that supported the dual objectives of financial stability and financial inclusion. This led to policies advocating for non-exclusivity in the use of mobile money agents and ultimately to agent interoperability. However, as the market continued to grow and mature, some market players demanded interoperability to kickstart client uptake, which had not seen rapid growth. Comprehensive interoperability was a clear need.

The Bank had to assume a leadership role in the push for sustainable interoperability. It opted for a market-based approach to interoperability, which was backed by evidence, and began to coordinate the process. It approved a neutral market facilitator, the International Finance Company (IFC) and the Financial Sector Deepening Trust (FSDT) of Tanzania, to facilitate engagement with DFS providers and reach agreement on an interoperable solution.

The IFC facilitated the industry-led interoperability project, with financial support from The Bill & Melinda Gates Foundation and the FSDT. This involved coordinating industry meetings to develop and reach consensus among mobile money providers on business rules and commercial agreements for interoperability and submit them to the Bank of Tanzania for consideration. This exercise began in September 2013 and, after several meetings in which participants reached a greater understanding of the regulatory framework, market demand, payment systems and rule development, consensus was reached. A year later, in September 2014, two of the four mobile network operators (MNOs) signed off on the wallet-to-wallet operating rules, which led to technical arrangements to initiate interoperability. In December 2014, the third MNO came on board. It took another year for the fourth to sign on, and by February 2016, Tanzania was one of the first markets in the world to have full interoperability of mobile money services (Figure 1). 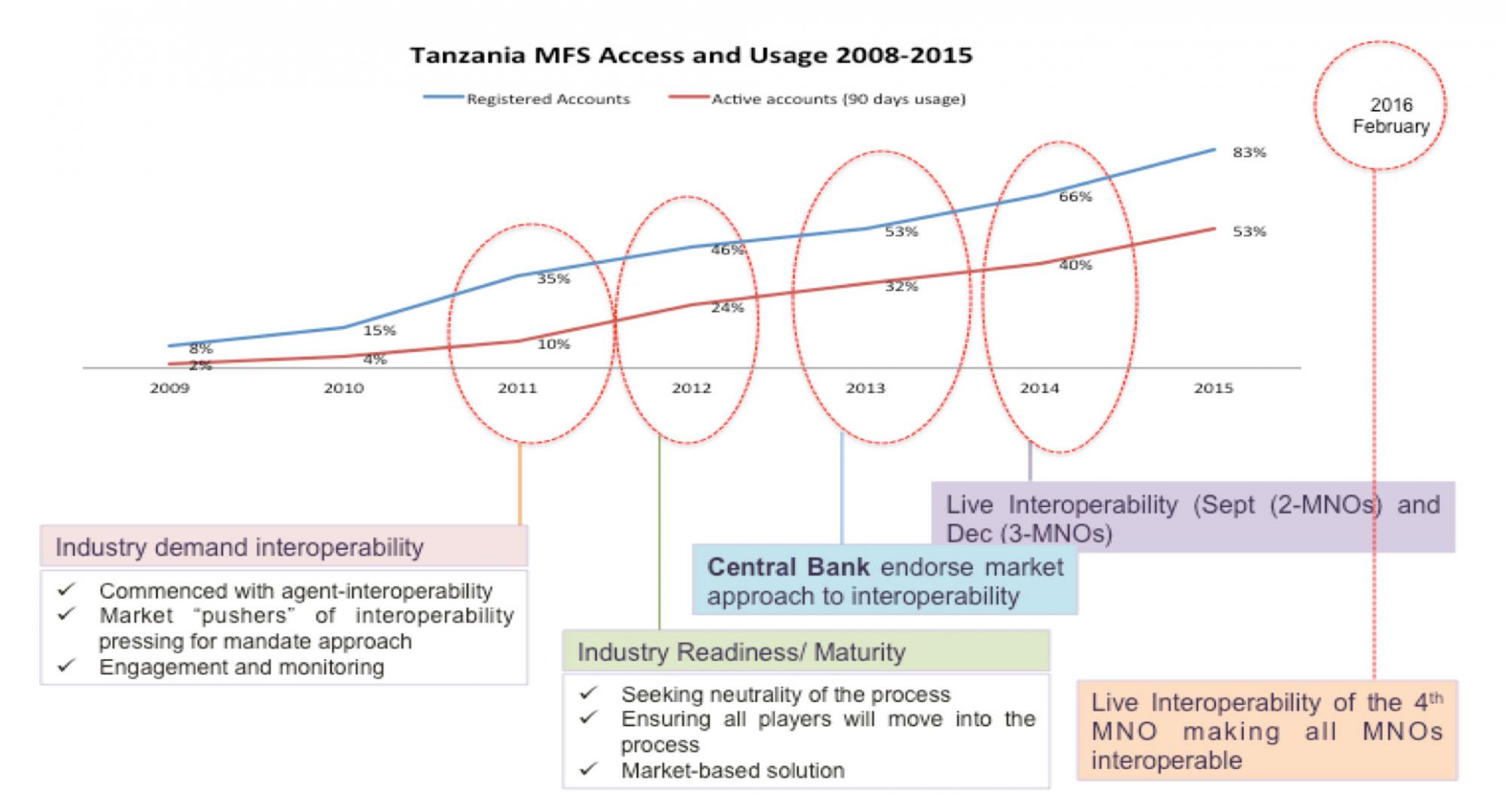 Other markets could learn lessons from Tanzania’s journey. It is worth noting that although Tanzania was well-suited to a market-based approach to interoperability, with its supportive central bank, conducive regulatory framework, and a sufficient level of market competition and maturity, two other factors played an important role: (i) the value proposition for the private sector was taken into account; and (ii) private and public sector dialogue was enhanced through the public policy lens of financial stability and financial inclusion. This helped the regulator balance its dual mandate and ensure financial inclusion initiatives do not compromise financial stability.

Tanzania’s interoperability journey is still underway: the market is currently expanding the use case for interoperable services through merchant payments and extending interoperable services beyond MNOs to banks and other players. This will also involve improving the clearing and settlement process, shifting from bilateral arrangements to a multilateral process that includes a switching process. The Bank of Tanzania is continuing to play a monitoring role and provides guidance and direction on a process that is efficient and creates value not only for market players, but also for users and other stakeholders. In the end, this will ensure the best solutions are implemented and satisfy both private sector and public policy objectives—a task guided by the same principles that led to interoperability in the first place.

ABOUT THE AUTHOR
Kennedy Komba is the Alliance for Financial Inclusion's (AFI) Head of Strategy, Member Relations and Governance.