Gender and financial inclusion in the Philippines

In many developing countries, women are significantly less financially included than men. The Philippines presents an interesting case because not only that the country has more women with formal accounts than men, it is also the country with the largest financial inclusion gender gap in favor of women. What are the reasons for the reverse gender gap? What is Bangko Sentral ng Pilipinas (BSP) doing to build a financial system that responds to the needs of both men and women?

In 2014, the World Bank Global Findex showed that 58 percent of women had a bank account at a formal financial institution, compared to 65 percent of men. This changed from 2011 where 47 percent of women and 54 percent of men had formal accounts. Although these figures represent a significant advancement for women, the gender gap remains at 7 percent. The gap is even higher among developing countries where the gender difference has persisted at 9 percent.

Interestingly, the Philippines has the largest gender gap in favor of women — 37.9 percent of Filipino female adults have a formal account compared to 24.4 percent among male adults, or a gap of 13.5 percentage points. 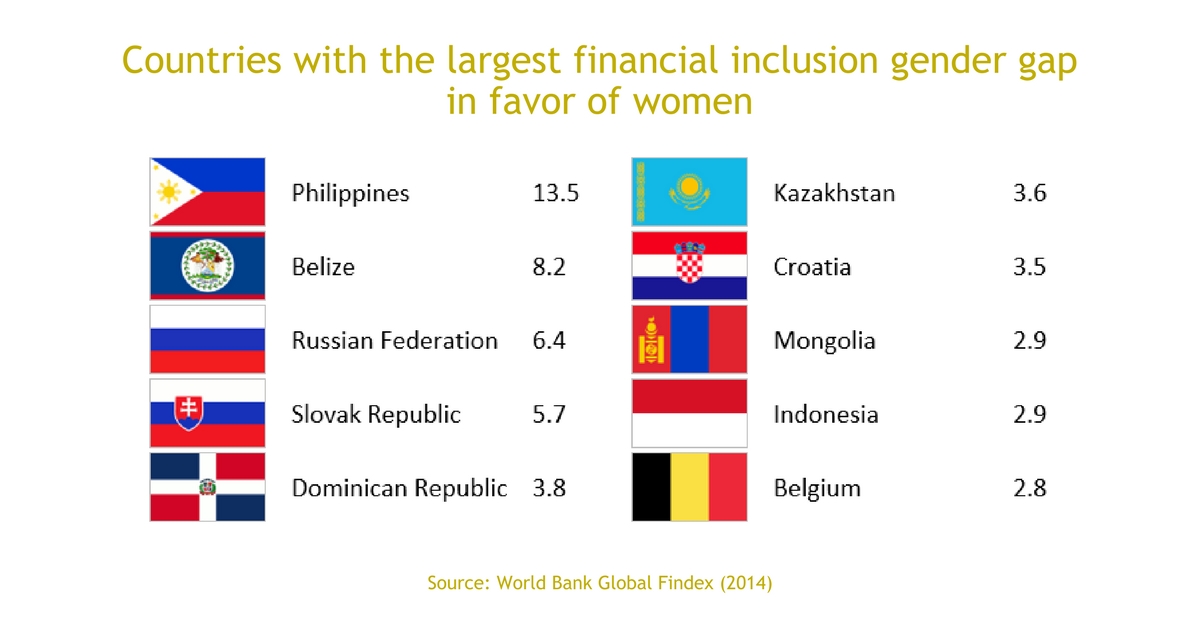 Why are Filipino women more financially included than men?

In the Philippines, women enjoy equal rights with men as reflected in the country’s ranking in the World Economic Forum’s Global Gender Gap Reports. In 2017, the Philippines is ranked tenth in the world and the most gender equal country in Asia. What could be possible reasons for the reverse gender gap in the Philippines?

Culture is a probable explanation. In a traditional Filipino household, it is usually the wife who is in charge of budgeting and managing household finance.  Given this setting, it is more likely for the wife to open an account in her name, if not a joint account with her husband.

The higher level of financial capability of Filipino women may also be a contributing factor. The 2015 World Bank Financial Capability Survey showed that Filipino women are 4 percentage points more likely than men to understand the primary purpose of insurance products as a risk management tool, suggesting that the women have higher financial literacy than men.

The reverse gender gap in financial inclusion in the Philippines is driven by societal, cultural and behavioral factors, not by regulations that specifically target women.

Financial inclusion policies in the Philippines are gender-neutral. Policymakers, in crafting policies to promote financial inclusion, think not of a specific gender but of market segments that are traditionally unserved or underserved such as poor and low income households, rural communities, small and medium enterprises (SMEs), farmers and fisherfolk, indigenous peoples and persons with disabilities, among others.

Financial service providers also do not appear to discriminate against a specific gender. Since problems such as lack of formal identification and lack of collateral are not gender-specific, there is no special treatment to a particular gender in terms of Know Your Customer (KYC) requirements in account opening, and collateral requirements in obtaining credit.

We need policies that work regardless of gender.

We believe that balancing the gender gap does not necessarily mean embracing a set of policies focused on a specific gender, but rather fine-tuning policies to close the gender gap in financial inclusion. Ensuring product suitability is likewise important so that there will be a wide range of financial products and services that are appropriately designed, priced and tailor-fitted to the needs different market segments.

Previously, we put in place enabling regulations that resulted in incremental gains in increasing access to financial services for all. This time, we are setting our sights on digital innovations to drive transformational change.

The digitization of financial products and services has the potential to balance the gender gap in financial inclusion.

Our recent policy issuances are geared towards digital financial inclusion such as the regulations on cash agents, virtual currency exchanges and risk-based KYC. We are embarking on an ambitious journey towards a cash-lite society through the National Retail Payment System (NRPS) project. Related to this effort is our current work on the creation of a basic deposit account that will serve as gateway to transact in the digital finance ecosystem as well as ongoing coordination with other government agencies and legislators to develop a foundational biometric-based ID system. A digital finance ecosystem with the right mix and range of providers, digital solutions and delivery channels will facilitate the efficiency and reach of financial services to all, men and women alike.

Everyone plays a role

It is not just policymakers who have a role in this endeavor; the private sector and other stakeholders also play a crucial role.  The National Strategy for Financial Inclusion (NFIS) serves as a platform for multi-sectoral collaboration and fosters a harmonized approach to build a more inclusive financial sector that responds to the needs of both men and women.