Photo: Woman is paddling in a pirogue on Congo River/iStock
April 9th, 2019 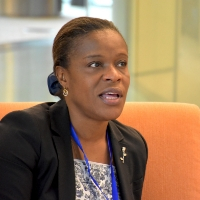 Marie-José Ndaya Illunga: “One of the most pressing challenges is how financial inclusion can be improved through a sound financial literacy program for women.”

Banque Centrale du Congo (BCC) has been an active member of the AFI network since it joined in October 2010. We sat down with Marie-José Ndaya Illunga, Deputy Director at BCC and co-chair of AFI’s Consumer Empowerment and Market Conduct (CEMC) working group to talk about her views on the pace of advancing financial inclusion, the importance of consumer protection in the DRC, and the role that AFI can play in its development.

AFI: How has financial inclusion evolved in the Democratic Republic of the Congo (DRC)?

Marie-José: BCC joined AFI in October 2010. At that time, financial inclusion in the DRC was at only five percent. Since then, we have made a lot of progress in areas such as agent and mobile banking — the latter of which we received a grant from AFI, and that helped increase the rate to almost 35 percent by end of 2017. This was despite many infrastructure issues and a volatile political landscape.

AFI: That’s an impressive achievement! How do you plan to carry that momentum into the future?

We have put into place policies that really helped the central bank improve the rate of financial inclusion. Now that everything is in place, we are planning to go even faster. We are aiming to achieve 60 percent in the span of two to three years. It is an ambitious goal, but it’s possible.

AFI: What challenges do you face in achieving this goal?

Financial institutions are often far from rural areas. People have been known to walk for an hour or more to access these institutions. As such, mobile banking, agent banking help. At the same time, the BCC finished modernizing its payment system. Now, we have ATMs everywhere. They are in the main cities but now we want to have them in rural areas.

AFI: What about for women? What is being done to narrow the financial inclusion gender gap?

One of the most pressing challenges is how financial inclusion can be improved through a sound financial literacy program for women. In the DRC, there is a gap in financial education for women and youth. However, one big barrier that was removed a year ago involved family law. Before that, a woman could not open a bank account without the consent of her husband. Now this has changed, allowing women to access financial products without such consent.

Globally, women play an important role in creating, contributing and improving the wealth of a country. As such, we must find a way to make it easy for them to access financial products and services. Currently, we are encountering problems in this area, so we are working on a mechanism to improve it.

AFI: How do you see AFI programs contributing to the central bank’s objectives?

AFI has been very supportive and contributed greatly to our progress in terms of knowledge and learning about what members are doing. Before we joined the network, we had never heard of agent banking. Also, we only had a very broad understanding of consumer protection and did not have anything specific for banks, microfinance and cooperatives. Thanks to AFI, we were able to exchange knowledge with other members, which has helped us put into place regulations easily. We try to learn from other country experiences about what they have done in order to achieve greater successes.

In the last Global Policy Forum (GPF), for example, there was a session on regulatory sandboxes. That was useful to us. Now we are implementing sandboxes in the DRC. Every time we attend an AFI program, we learn something. When we participate in a working group, we learn a lot. Afterwards, we write reports on the sessions and present the findings to others, so when we learn something, it is not just for us but for everyone.

AFI: What are your key takeaways from the training sessions you have attended?

In most AFI programs, there are many roles members can play to share experiences and knowledge, such as facilitator or moderator. The sessions are very intense but very, very useful and effective. We have learned a lot but now we need to practice more. Every member has a role to play within AFI.

AFI: As co-chair of AFI’s CMEC working group, you are instrumental in shaping its direction. How do you see the working group evolving in the future for the DRC?

CMEC has been around for a long time, but new subjects keep emerging within that remit. At present, we are trying to see what can be made part of consumer protection. For example, for many years, we had been talking about financial inclusion for common services and products. Now that we have mobile and digital banking, we must improve consumer protection for digital finance and women.

View our CEMC Working Group Factsheet to learn more about the working group and its policy changes and peer reviews.