Photo: Close-up on a card payment at a shop in Buenos Aires, Argentina.
May 16th, 2019
By Senior Analyst M. Natalia Isi and Deputy Manager of the Financial Development Department Germán San Lorenzo at the Central Bank of Argentina

An overview of Argentine debtors

Amid this momentum, the Central Bank of Argentina (BCRA) established a dedicated financial inclusion department with financial inclusion data and financial literacy as its main areas of focus. One of the team’s first tasks was to analyze access to credit in the Argentine population. Among the key findings were that roughly half of Argentine adults has at least one credit product, with credit cards being the most used. Additionally, more males have accumulated some form of debt than females, with the difference tending to increase when the length of the loan is longer, the amount is higher and where collateral is required.

Access to credit is one of the pillars of financial inclusion, and its analysis is crucial for developing policy solutions that improve effectiveness. With this in mind, starting early 2018, we began analyzing data the central bank’s credit registry (CENDEU), a vast public database that contains the credit history of Argentinians. The information is supplied by regulated financial institutions from both individuals and firms.

During this research, we found that roughly one in two adults, or 51 percent[1], has at least one form of debt registered in the financial system[2], broken down as 47 percent of women compared with 54 percent of men (see Chart 1). While the gap is significant, it could be partly explained by women participating less in the labor market[3] compared with men (49.1 percent versus 69.5 percent) and having a lower employment rate[4] (43.9 percent versus 64 percent)[5]. 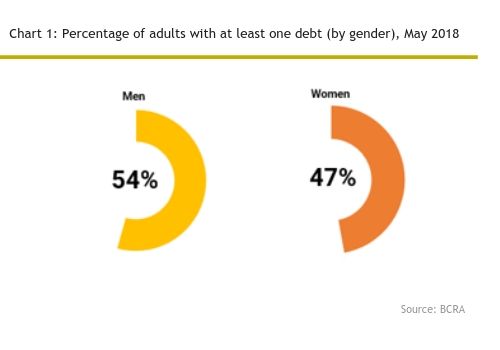 By comparing those two figures – women’s labor force participation rate with the percentage of women who have at least one debt - the difference is considerably lower than for men (2.1 percent for women versus 15.5 percent for men).

While the gender gap was relatively narrow for bank credit cards and personal loans (52 percent of debtors were male), lengthier loans such as mortgages saw a more prominent difference of 64 percent for men and 36 percent for women.

Gender patterns also became apparent when populated by age. In almost every age group until 60 years old[6], the share of women with at least one type of debt was less compared with men. This proportion inverts in the case of debtors aged 60 and above, however, it is important to note that life expectancy in Argentina is higher for women (80.3 years old) than men (73.5 years old)[7].

Among types of debt, the most common was bank credit cards[8] with 32 percent of adults having at least one debt of this type (Chart 2), followed by personal loans at 22 percent. Both figures greatly overshadow mortgage loans at 0.8 percent[9]. 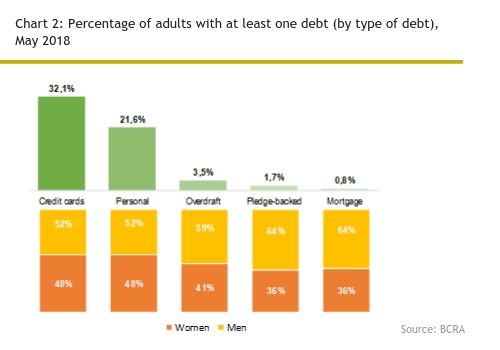 According to the data, the largest number of individuals with at least one type of debt in the financial system were aged between 35 and 39 years old (Chart 3). Meanwhile, the highest proportion of debtors were aged between 30 and 79 years, or about 65 percent of the total population.

Separated by institution, private banks were the largest source of lending, followed by credit- and/or purchasing card-issuing companies and other non-financial credit providers[10]. In recent years, however, the number of financial technology (FinTech) companies offering alternative lending has tripled to 45 in December 2018 from 15 companies in March 2015. While the amount these FinTech companies are lending is also growing, they represent only 0.2 percent of what the formal financial system lends. As these companies are not regulated by BCRA, most do not report data through CENDEU meaning that their debtors were not taken into account for this research. 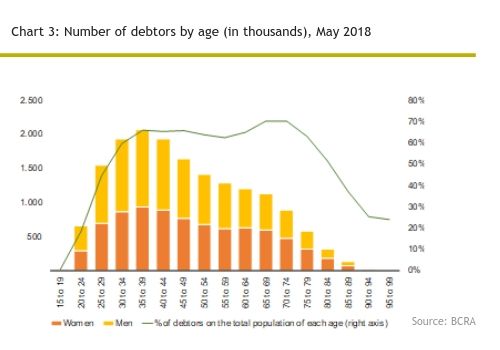 In recent years, BCRA has implemented several policies to improve access to credit including by creating personal, pledge-backed and mortgage loans adjusted by units of purchasing power (UVA). UVA is a unit of account that is amended daily to the consumer price index. With UVA-adjusted loans, the first instalments are much lower than with traditional fixed rate loans. Therefore, the income required to obtain a UVA-adjusted loan is considerably smaller[11].

Meanwhile, CENDEU has also broadened its scope. Whereas previously it only showed information on non-performing loans, it now also contains both positive and negative inputs from a person’s entire credit history over the previous 24 months. The data is then categorized into six levels, or “situations”, with one being the highest and six the lowest. As a result, financial institutions have more and better information to assess a customer’s credit worthiness.

Additionally, BCRA has increased the maximum limits for small and microcredits as well as eased the conditions for granting loans under “credit scoring” and “credit screening” methodologies. For small amounts of credit, financial institutions only require valid identification from debtors.

As outlined above, there are clear findings regarding the performance of credit disaggregated by gender and type of debt that could generate deeper study and further policy solutions. Considering the data available at CENDEU, this research could be continued and expanded by incorporating relevant characteristics such as time, debt amount and debtors’ “situation”. While this research is in early stages, further analysis will contribute to the construction of a more complete picture of debtors in Argentina’s financial system.

[1] Individuals 15 years old and above. This criterion was considered following the standard used by the World Bank for its financial inclusion indicators.

Argentina’s adult population for 2018 was calculated based on the estimates and projections published by Argentina’s National Institute of Statistics and Censuses (INDEC). https://www.indec.gov.ar/nivel4_default.asp?id_tema_1=2&id_tema_2=24&id_tema_3=85.

[3] Computed as the percentage between an economically active population and the total population (aged 15 years old and above).

[4] Computed as the percentage between the employed population and the total population (aged 15 years and above).

[5] Data from the Permanent Household Survey for the third quarter of 2018. https://www.indec.gob.ar/uploads/informesdeprensa/indicadores_eph_2trim17.pdf.

[6] Except for the first age range (15 to 19 years old), where the total proportion of debtors is not significant.

[8] Unlike the analysis conducted on the gender and age of the debtors, the assessment by type of indebtedness does not take into account debtors of credit cards issued by non-financial companies.

[9] In order to determine the number of debtors by type of debt, the information was consolidated by individual debtor and type of financing. Therefore, if an individual has more than one type of debt, for example, a personal loan and debt on a credit card, he or she will be counted as a debtor in both categories. Similarly, if an individual has two credit cards (from the same or different entities) and a mortgage loan, he or she would count as a debtor in both the category and mortgage loans category.

[10] In Argentina, there are 63 banks (50 private banks and 13 public banks), 124 companies issuing credit and/or purchasing cards and 238 other non-financial credit providers.