Photo: PIRI drum at the Annual Roundtable of the Leaders of the Pacific Islands Regional Initiative (PIRI) in Samoa, June 2018.
May 17th, 2019
By Deputy Governor Luke Forau and Manager - Financial inclusion Linda Folia at the Central Bank of Solomon Islands

Beating its rhythmic pulse, a wooden drum accompanies the members of the Pacific Islands Regional Initiative (PIRI) on their journey towards financial inclusion. Passed annually from host country to host country, the drum symbolizes not only the cultures and traditions of the Pacific but also the unity and milestone achievements made in financial inclusion by these archipelagic countries.

Since its inception, PIRI has made enviable progress in financial inclusion. Launched in June 2015 in Dili, Timor-Leste, the initiative was created by central banks in the Pacific region to recognize and foster the continued efforts of member countries and address the unique constraints they face in reaching their financial inclusion goals. Since then, it has championed gender inclusive finance by launching the Denarau Action Plan, and become the first initiative in the AFI network to outline regional policy commitments on financial inclusion and climate change as well as have all members commit to the Maya Declaration. PIRI’s founding members are Banco Central de Timor-Leste, Bank of Papua New Guinea, Central Bank of Samoa, Central Bank of Solomon Islands, National Reserve Bank of Tonga, Reserve Bank of Fiji and Reserve Bank of Vanuatu.

Unveiled alongside the regional initiative, the PIRI drum has traveled more than 19,000km from Timor-Leste to Tonga, Vanuatu, Papua New Guinea, Samoa and, most recently, the Solomon Islands. Its voyage embodies the tremendous interest and support of member countries to advance financial inclusion as well as its importance in stimulating economic growth and sustainable development. It also signifies the progress still to be made on core aspects of financial inclusion, such as regulation, financial technology, market innovation or policy.

In most Pacific islands, drums have been used for generations to gather people both near and far for duties that share a common purpose, sounding various beats to express different messages. For some parts of the region, drums hold a spiritual significance that allows ancestors to communicate with nature, land or sea creatures. In this way, the PIRI drum also demonstrates the harmonious relationship between people and nature with its resounding reminding policymakers in the Pacific and beyond to incorporate environmental considerations when devising smart policies for financial inclusion.

By embedding this important symbol with both age-old traditions and the needs of modern-day members, the drum shows that to advance financial inclusion in the region - and the wider AFI network -, local understandings must be incorporated when contextualizing financial inclusion for the Pacific.

Today, the PIRI drum beats once again to call on all members to convene in Honiara, Solomon Islands, from June 3-6, 2019 with the message of “Advancing Green Finance through Youth Inclusion”. 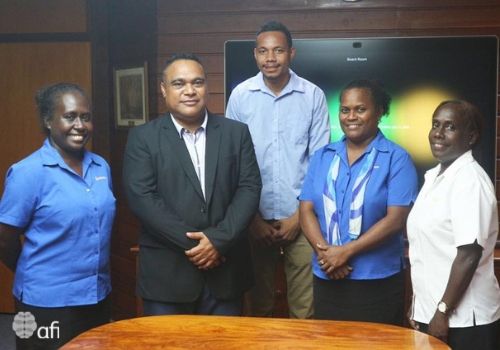 Photo: Deputy Governor Luke Forau (2nd from left) and Manager - Financial inclusion Linda Folia (1st from right) are accompanied by the rest of the Financial Inclusion unit from the Central Bank of Solomon Islands.

Taking RMA Bhutan’s green ambitions to the next level