The National Bank of Rwanda (BNR) is hosting this year’s AFI Global Policy Forum (GPF). Deputy Governor Dr Monique Nsanzabaganwa recently sat down with the Alliance to discuss its key themes and her hopes for the flagship event. 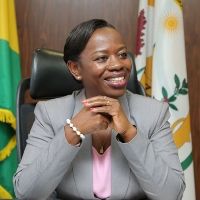 In just two months’ time, the BNR will be centerstage as it co-hosts the 2019 AFI GPF, the world’s most important forum for financial inclusion policymakers. For Deputy Governor Dr Nsanzabaganwa, the event acts as a backdrop to showcase Rwanda’s financial inclusion achievements and highlight how the country harnesses one of its biggest asset: youth.

Comprising 26.6 percent of Rwanda’s population, youth (16-30 years) make up a vital — and  increasingly tech-savvy — chunk of the economy that Dr Nsanzabaganwa is careful not to overlook.

“Youth is not only the future but really the Rwanda of today,” she said. “They are already contributing and making decisions. They’re engaged financially and, with technology, they’re really doing wonders, not only in fintech industry, but also in coming up with innovations that can improve the practice of farming and other sectors as well.”

Regulatory powerhouses like BNR are taking notice, responding with measures including promoting the use of mobile technology to bring more young people into formal financial services.

“With your mobile, you can open an account by just having your ID,” she explained.

Despite such strides, many barriers still inhibit young people from gaining access to finance, particularly those wanting to start fledgling businesses. Among the main challenges faced is a lack of credit history, something Dr Nsanzabaganwa hopes to remove by expanding what banks accept in terms of traceable financial records.

“With telephone gadgets, they buy airtime, pay bills,” she said. “We’re looking at how to harness data, so that we populate the credit information system and by the time they need to open an account in a bank, it’s not like they’re starting from zero.”

As one of Africa’s technology hubs, Dr Nsanzabaganwa sees how digital innovations can spur financial inclusion in Rwanda provided efforts are made to ensure that marginalized groups are not left behind.

For BNR, this includes pushing financial literacy -- as outlined in the country’s national financial education strategy and financial sector development programs – at schools, universities, youth council, religious buildings and a host of other popular hang outs (including hair salons and bars).

“We have to be proactive and gender responsive in this financial inclusion. You don’t have to wait for the gaps to be created so that you go deal with them in 10 years,” she said.

“Last year, we had counted more than 100,000 mobile money agents, and I can bet that almost all were youth,” she said.

While many hurdles remain, these have only fueled the central bank’s drive to become a world-class leader in financial inclusion and motivated it to co-host the AFI GPF.

In addition to sharing Rwanda’s lessons and successes with other financial regulators, BNR also hopes to learn and exchange knowledge with its peers. High on the agenda is how to move beyond mobile technology and develop comprehensive solutions that can de-risk those living in rural areas and unlock the flow of finance to them.

“We want to engage and be a reliable member of AFI that is really engaged and committed,” she said. “We are looking for some bright ideas or projects that can emerge that can really spice up what we have been doing in this region of East Africa.”

People first: how regulators are addressing the climate emergency