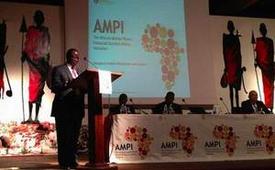 BANGKOK — The development of mobile financial services (MFS) as a tool for the promotion of financial inclusion took a major step forward this month with two high-level regional forums taking place in Tanzania and Colombia.

In Africa, the inaugural meeting of the African Mobile Phone Financial Inclusion Policy Initiative (AMPI) took place in Zanzibar, Tanzania from 14-15 February. Co-hosted by the Bank of Tanzania, the Central Bank of Kenya and the Alliance for Financial Inclusion (AFI), the event saw high-level policymakers from across the African continent make a commitment to sharing best practices and experiences on MFS policy and work together to ensure the region’s unbanked population is able to easily and safely use mobile technology to gain access to the formal financial sector. At the conclusion of the meeting representatives from 18 African policymakers released a statement, laying out the next steps for AMPI in 2013. “The benefit of expanding mobile financial services to Africa’s unbanked is undeniable,” said Central Bank of Kenya’s Governor Ndung’u. “Together we have the experience, the knowledge and now a common regional commitment to make Africa the world leader in this field, through smart, secure and practical policies as well as cost-effective delivery channels.”

In Colombia, policymakers gathered in Cartagena on 21-22 February in the first regional meeting on MFS to take place under the AFI banner. Co-Hosted by Ministerio de Hacienda y Crédito Público de Colombia, the Multilateral Investment Fund (MIF) and AFI, participants included high level policymakers from across Latin America and the Caribbean along with as well as stakeholders, representatives from financial service providers and telecommunications companies. The region has witnessed significant progress in the adoption and expansion of MFS, but has also seen a great variety of approaches to how these services are regulated and implemented. Regional policymakers and private sector partners used the two days of meetings to compare and contrast experiences and well as to celebrate successes in the field. By tacking MFS issues common to the entire region, policymakers aim to promote and expand services throughout Latin American and the Caribbean. “E-money is the next step in the dematerialization of money. The creation of e-money is a revolution like the introduction of paper money,” said Daniel Schydlowsky, Superintendent of Superintendencia de Banca, Seguros y AFP (SBS) del Peru. “Poor people will substantially benefit from this development.”

In both regions policymakers from the AFI network are working in support of the Maya Declaration principles introduced in 2011 during the AFI Global Policy Forum (GPF) held in Mexico. Many AFI members from both regions have made specific commitments to the expansion of MFS as a part of this Declaration and the regional efforts now taking place show both the dedication of the AFI Members to the Maya Declaration goals and serve to highlight the significant achievements which have taken place in last two years.

The Alliance for Financial Inclusion and its 95 institutions are focused on developing smart policy solutions and highlighting the financial inclusion accomplishments that can be achieved when regulatory institutions from developing and emerging countries come together as equals, and come away with policies that are right for their specific needs and circumstances. Through focused working groups, regional conferences and the annual Global Policy Forum, AFI has become the largest and most comprehensive network of financial inclusion policymakers in the world. For more information about the work of the Alliance, visit: www.afi-global.org.

This toolkit aims to support AFI member institutions in setting up a system to facilitate management and documentation of evidence on the effectiveness of their
Read more
Data Collection Processes and Defining Micro, Small and Medium Enterprises

This case study summarized a series of considerations that the Moroccan SME Observatory had to consider before achieving a coordinated approach to MSME data col
Read more
Policy Framework on MSME Data Collection: A Guide for Gender Inclusive Finance

This case study looks at the current state of financing for the agricultural sector in Uganda, highlighting the initiatives being taken to overcome the challeng
Read more
Policy Framework on the Regulation, Licensing and Supervision of Digital Banks