Photo of one of these SABs that made the highest number of transactions in 2021.

Banking subagency: the Superintendency of Banks of the Dominican Republic’s new strategic focus

Financial inclusion is one of the six strategic objectives of the Superintendency of Banks of the Dominican Republic (SB). The SB’s special focus is on banking access points as part of drive to increase financial inclusion. The access points include banking subagents (“SABs” for Subagentes Bancarios), along with ATMs and the conventional brick-and-mortar branches of financial service providers.

SABs are local small and medium businesses, like corner shops, markets, and pharmacies, that can offer limited banking services acting as agents for financial service providers. The Dominican Monetary Board created SABs as a financial outlet that could serve as an alternative to branches in remote places where the benefit of brick-and-mortar offices would not justify their costs.

Traditionally, the data and research on SABs focused on registered SABs – those who have been contracted as an entity and registered in the SB. However, since this analysis is focused only on registry identification, it did not reflect the operational reality of the SABs sector. Points without transactions have not been adding effective, but rather potential value to the financial ecosystem, and carrying out financial operations is how they make their impact.

On average, registered SABs contractually offer their services to more than one bank. This implies that existing number of banking access points was overestimated, as nearly 60 percent were inactive, failing to gauge the existing network and tackle the so-called banking deserts – areas where there are no bank branches.

To overcome these shortcomings, the SB has shifted its focus to operational SABs, that is, those subagents that effectively carried out transactions with the public, within a 12-month period. Operational SABs represent a better indicator than registered SABs, because they reflect banking access points that people have used, rather than one that they could potentially use.

The SBs new strategic approach prioritizes effectiveness over sheer quantity. What good is a registered SAB if people don’t use it?

By the end of 2021, the Dominican banking system had 2,016 operational SABs –close to 40.2% of registered SABs. The number of operational SABs peaked in 2017 with 2,915 establishments and shows a steady decline from 2018 to 2021. In spite of this, the transacted amounts constantly increased each year reaching DOP67 MM (approx. USD 1.21 MM) by 2021, with a year-on-year increase of 12.8%. This suggests that the national operational SABs network is becoming more efficient, taking advantage of both economies of scale and scope.

Since the SABs model has been implemented, convenience stores (corner shops called colmados) have remained the commercial category with the most outlets, reaching a 32 percent share in 2021. These are followed by pharmacies and supermarkets with a 25 and nine percent share, respectively, in the same period.

SABs steadily increased the number of their monthly financial services, averaging about 662 per month in 2021. 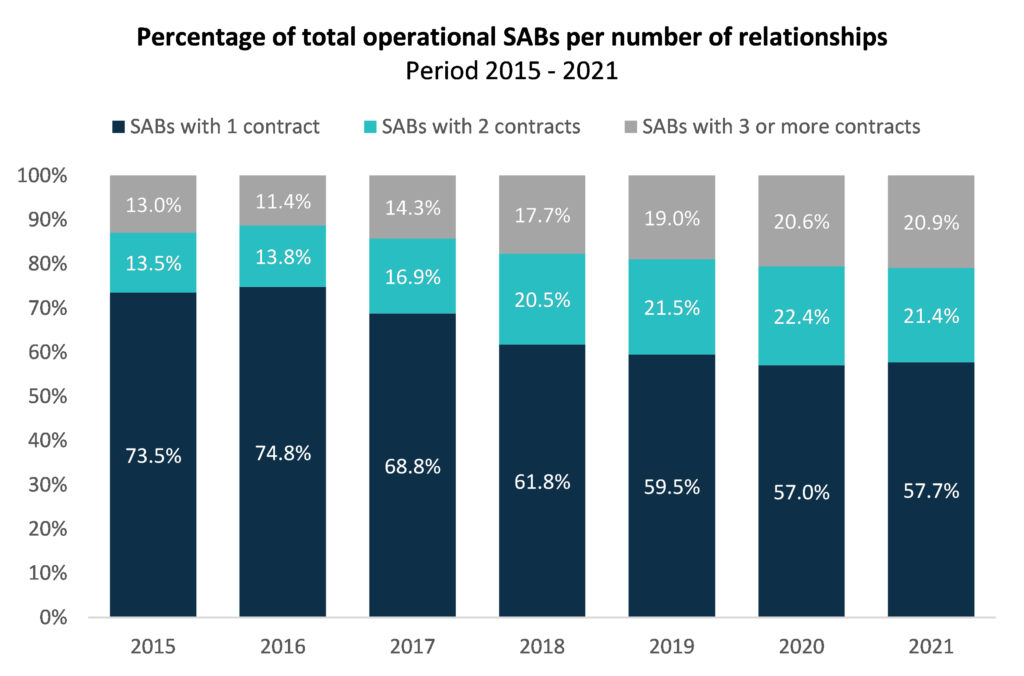 When SABs are grouped according to the number of operational relationships with different financial service providers (distributed according to number or contracts, one , two  and three or more contracts), roughly 20 percent  of operational SABs served three or more financial service providers, but accounted for 53 percent of all transactions in 2021. In fact, SABs with three or more relationships, have continually increased the number of their transactions based on the total amount traded.

Operational SABs with a single contract have become less active over the years, shrinking by 56 percent from 2016 to 2021. Their yearly transacted volumes have also decreased from 45 percent in 2016 to only 27.6 percent in 2021

These results reflect an incremental trend in transaction volumes by having multiple operational relationships, which makes these SABs more profitable than those that are associated to a single financial service provider.

To summarize, the new strategic focus shows that SABs which are contractually working with two or more financial service providers are more likely to transact and complete more operations for financial consumers. This success, in turn, implies that certain outlets become more attractive as access points for different providers, generating network effects and efficiency that favor banks, SABs, and users.