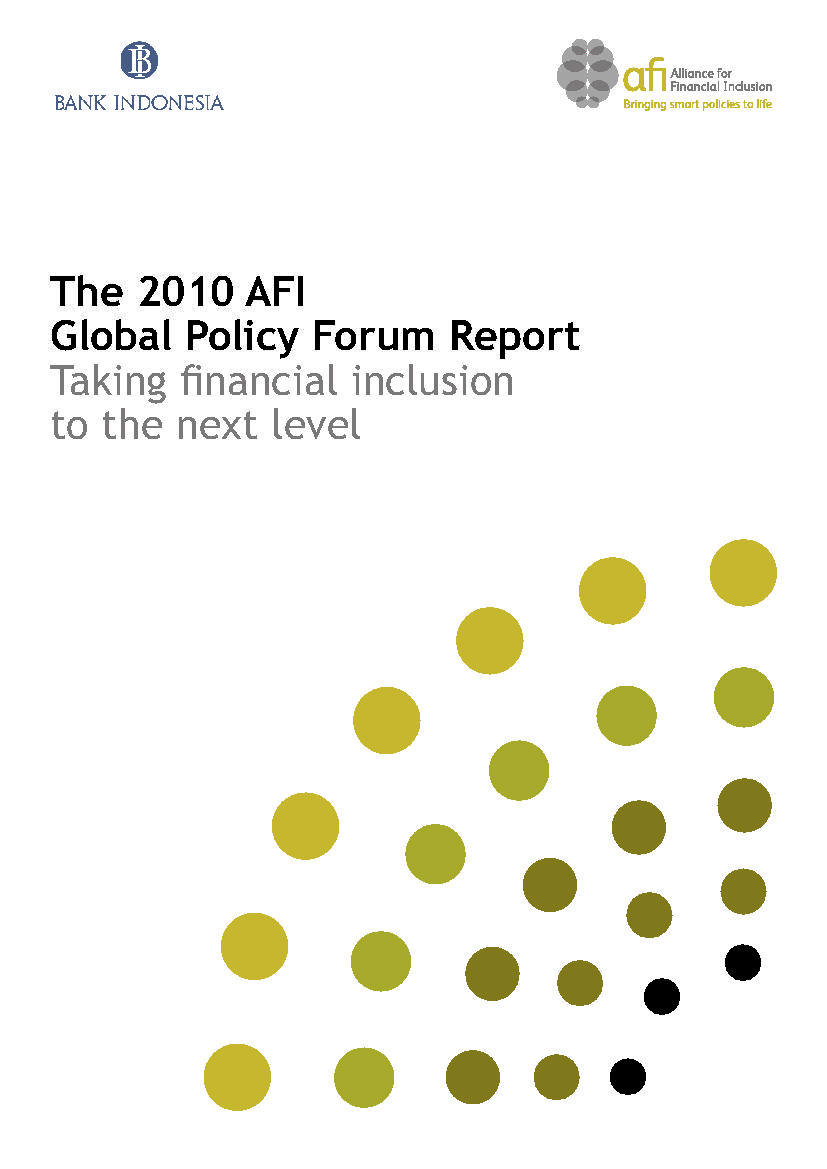 The 2010 Global Policy Forum (GPF) Report: Taking Financial Inclusion to the Next Level

Reflecting back on 2010, we are sure you will agree it has been an exciting year to be part of the AFI community.

Momentum was high after the first annual Global Policy Forum (GPF) in Nairobi in late 2009 and this energy was carried into 2010, with the AFI network converting some of the best ideas from
Nairobi into concrete action. Three working groups—Financial Inclusion Data and Measurement, Mobile Financial Services, and Financial Integrity—and five Policy Champions delved into issues ranging from consumer protection to mobile financial services.

The Knowledge Exchange program was extremely successful in 2010, with nearly 20 AFI member organizations participating in about a dozen country visits. The outcomes were significant: stronger ties were forged between AFI members, important knowledge and experiences were shared, and policymakers in developing countries embraced the concept of peer-to-peer learning. With even more connections forged at the 2010 Forum, we expect this program will continue to thrive.

The AFI network has grown in both size and vibrancy over the last year. More than 60 developing country policymaking institutions became AFI members, which has meant that individuals from 50 countries are now connecting, participating, sharing, and forming bonds as peers. This rich knowledge network is a hub of innovation and provides leadership on solutions to one of the world’s major economic development challenges. New ideas generated by members at our annual meeting can, and will, change the course of the future.

Over the last year, developing countries gained a voice and a foothold in the most important global policy dialogue about financial inclusion: the G20 process. AFI’s Global Policy Forum gave participants the opportunity to engage directly with the G20 co-chairs responsible for financial inclusion and to help influence the final outcomes and commitments of the Seoul Summit.

This year’s Forum co-hosted by Bank Indonesia and held in Bali raised the bar a notch, challenging us to find ways to take financial inclusion to the next level. President Yudhoyono’s groundbreaking speech set the tone for a higher level of leadership and commitment by governments. The discussion and creative thinking generated over the course of the three-day meeting will help pave the way for AFI’s activities in 2011. Many of these outcomes are captured in this summary report.