Prof. Governor Florens Luoga, governor of Bank of Tanzania and chair of AfPI, opened the high-level virtual event with reassurances that the ongoing crisis held potential to build back stronger and more sustainably for regulators that remain focused, agile and flexible in a fast-changing environment.

Bank of Tanzania, which will head AfPI until its term ends in 2022, has spent years promoting digital payment platforms with the development of an interoperable payments system and financial services registry, contributing to a steady rise in financial inclusion levels. This complimented government efforts to expand digital infrastructure, including electricity supplies and broadband services, for the benefit of its largely rural population.

Also endorsing digitalization was Banque Centrale des Etats de l’Afrique de l’Ouest (BCEAO) Deputy Governor Norbert Toe. Across BCEAO’s eight nation jurisdiction, he said, efforts to promote the digital money transfers – such as by reducing fees on transfer worth less than XOF5,000 (USD9) – had triggered significant jumps in the use of these money platforms and person-to-person transfers.

“Digitalization has helped speed up transactions and transfers as well as open up access to finance particularly for the unbanked,” he said.

“When the crisis hit us, we did not start from scratch as AFI members had already accumulated a wealth of knowledge to mitigate the immediate impact of the crisis,” he said. “Our main principle was to build on what we had rather than completely reset the policy that we had been doing”.

Since the pandemic’s outbreak, AFI has harnessed its practical and high-impact expertise to issue a wealth of guidance to members and approve the AFI’s Statement on Post-COVID-19 Recovery. It also launched a COVID-19 Policy Response Dashboard to enhance peer learning and the tailoring of policy response interventions that support an inclusive, resilient and sustainable post-COVID-19 economic recovery.

Also championing knowledge exchange efforts was Central Bank of Kenya Governor Dr. Patrick Njoroge, who summed up his thoughts in three key points: adopt a people-centric approach, including by addressing the concerns of individuals groups; maximize opportunities while minimizing risks; and collaboration and information sharing is key.

This, said Awadzi, the current chair of AFI’s Gender Inclusive Finance Committee, would build towards narrowing financial inclusion gender gaps that persist in many AFI jurisdictions.

Marieme Dassanou, manager of Affirmative Finance Action for Women in Africa at the African Development Bank, shared insight on a series of case studies conducted by the organization and AFI in reducing the financial inclusion gender gap in seven African countries: Democratic Republic of Congo, Morocco, Nigeria, Rwanda, Senegal, Zambia and Zimbabwe.

“We need to shift the general perception of the financial sector towards women,” Dassanou said, adding that lending to women is often viewed as a “business risk”. Changing this mindset, she said, was essential for boosting access to financial services and products among women. 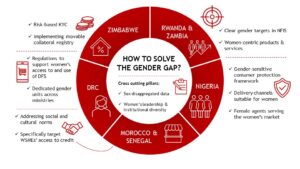 Building on these comments was Reserve Bank of Zimbabwe Deputy Governor Dr. Jesimen Chipika, who said that said that digitalization could act as a catalyst for women’s financial inclusion.

“While the pandemic was a huge threat to financial inclusion, it presented opportunities to formalize informal businesses and build digital skills, innovation and digital platforms,” she said. Women typically make up the bulk of informal sector workers in developing economies, resulting in them being disproportionately impacted by the pandemic.

“We need to remain agile and innovative with a gender lens always while mitigating the impacts of COVID-19, as we don’t know when it will end but we must leave no one behind” she added.

Ahead of the leaders’ roundtable, private sector stakeholders, regulators from developed countries and AFI members converged virtually on 11 August to discuss solutions that could help vulnerable groups gain greater access to financial services and exchange insights on technological innovation and practical supervisory approaches.

Among the key takeaways of the public-private dialogue session was that stakeholders must consider a range of different needs when designing products and services for specific groups, such as women, by considering various factors, such as age, education and income.

Developing-developed country dialogue saw regulators from both sides examine how to facilitate innovation in financial technology (FinTech) while providing practical supervision. The session also highlighted various risks relating to consumer protection, FinTech and cybersecurity, as well as examples of supervisory actions and tools being used to address these threats and enhance financial services.

As part of the four-day AfPI event, members from the regional initiative’s Experts Group on Financial Inclusion Policy (EGFIP) met to review several upcoming publications, including a special report and a policy catalogue.

Headed by Hakima El Alami, a director at Bank Al-Maghrib, EGFIP members also took stock of AfPI deliverables for the coming year and a summary of the key points for submission at the leaders’ roundtable.

AfPI, formerly known as African Mobile Financial Services Policy Initiative, is the primary regional platform for AFI members in Africa to support and develop financial inclusion policies and regulatory frameworks, and to coordinate regional peer learning efforts. With 39 active members, it is AFI’s largest regional initiative and among the most active with a number of knowledge products published in the past 12 months alone, including regional policy frameworks to strengthen agent networks for digital financial services and enhancing the financing ecosystem for small businesses in Africa.

The event was partially financed through AFI’s Multi-Donor Financial Inclusion Policy Implementation Facility, with participation of French Development Agency, the German Federal Ministry for Economic Cooperation and Development and the Ministry of Finance of the Grand Duchy of Luxembourg.

This toolkit aims to support AFI member institutions in setting up a system to facilitate management and documentation of evidence on the effectiveness of their
Read more
Data Collection Processes and Defining Micro, Small and Medium Enterprises

This case study summarized a series of considerations that the Moroccan SME Observatory had to consider before achieving a coordinated approach to MSME data col
Read more
Policy Framework on MSME Data Collection: A Guide for Gender Inclusive Finance

This case study looks at the current state of financing for the agricultural sector in Uganda, highlighting the initiatives being taken to overcome the challeng
Read more
Policy Framework on the Regulation, Licensing and Supervision of Digital Banks